Published by the Sonoma Coast Guide, The Birds by Hitchcock is the fan's guide to the filming of the thriller classic in Bodega Bay. This 5 inch x 8 inch magazine contains over 90 photos - some never before published - and stories of the local filming scenes. This book is invaluable for any fan traveling to Bodega Bay. With maps of filming locations, bits of dialogue, and information the 64 pages are a unique glimpse into the classic movie. The Birds by Hitchcock covers include reproductions of movie posters used internationally.

The Birds by Hitchcock is available at most Bodega Bay stores and by mail from The Navigator for $9.95 plus $1.50 postage in U.S., plus 7.75% sales tax to California addresses. 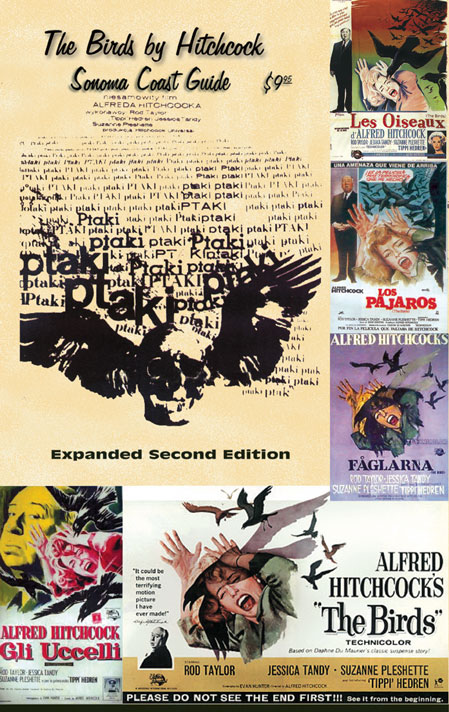 Mr. Hitchcock got the inspiration for his film from Daphne du Maurier’s “The Birds” screenplay which he happened upon while reading a copy of the short story collections published under the “Alfred Hitchcock Presents” banner. Essentially a mood piece, du Maurier’s story chronicles the struggles of a farmer and his family when their quiet Cornish village suddenly comes under attack by murderous birds.

The story immediately suggests a myriad of cinematic possibilities that stirred Hitchcock’s creative instincts. Financed by the success of his television show, and filmed with equipment borrowed from the Revue Studio, “The Birds” became Hitchcock’s first horror/fantasy film.

In 1961 Alfred Hitchcock decided the towns of Bodega and Bodega Bay were going to be the setting for this thriller featuring Tippi Hedren, Jessica Tandy, Rod Taylor, Suzanne Pleshette and various different species of birds. At that time the special effects were enough to thrill and frighten the young and old and still do to this day. Mechanical and live trained birds were used in the film along with optically altered film overlay of flying birds. The process of making this particular film took years to complete with a great many technical problems to overcome. It was completed and released in 1963.

He chose the Bodega Bay area for the weather and the skyline, which at that time was subdued and open. The old Potter Schoolhouse in the town of Bodega was slated for demolition when Hitchcock discovered it and had it shored up and rebuilt for the filming. It is the only original building that still stands to this day. The public is welcome to view the outside of the schoolhouse - it is however, a privately owned residence and may not be entered at this time.

In one of the opening scenes, Tippi Hedren is driving into Bodega Bay on a winding scenic road above the town. It’s called Bay Hill Road and it can be found on the northern edge of Bodega Bay on the right. Drive up about a mile until you can safely turn around, come back and park alongside the road and have a look - it’s almost the very same scene that was filmed over thirty years ago.

The Tides Wharf Restaurant and parking lot in Bodega Bay were used for the gas station, cafe and boat dock scene (the gas station was blown up on the studio lot). The Tides complex has been expanded and remodeled since then. The Brenner farmhouse was located across the bay on Bodega Head at an old shack owned at that time by Rose Gaffney. She rented the property to them and they fabricated a facade for the shack and out-buildings... unfortunately these structures burnt down in the late sixties. The other farmhouse where the farmer is killed in his home by birds still stands - it was private then and is still private now.

All of the inside scenes were recreated very specifically from the original buildings and shot within the studios, only outside shots were filmed on location. Many of the aerial and far away shots were painted mattes amplifying the size of the town.

Over 40 years later the visitor center in Bodega Bay receives thousands of Hitchcock fans every year hoping for a glimpse of some scenery from the movie that continues to frighten the world.

From the Bodega Bay Navigator, 1992 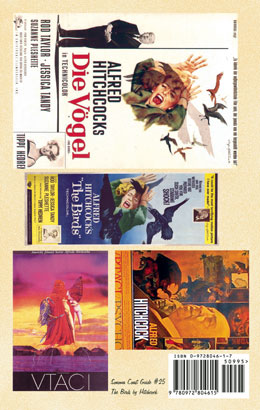 is available at the Tides Gift Shop